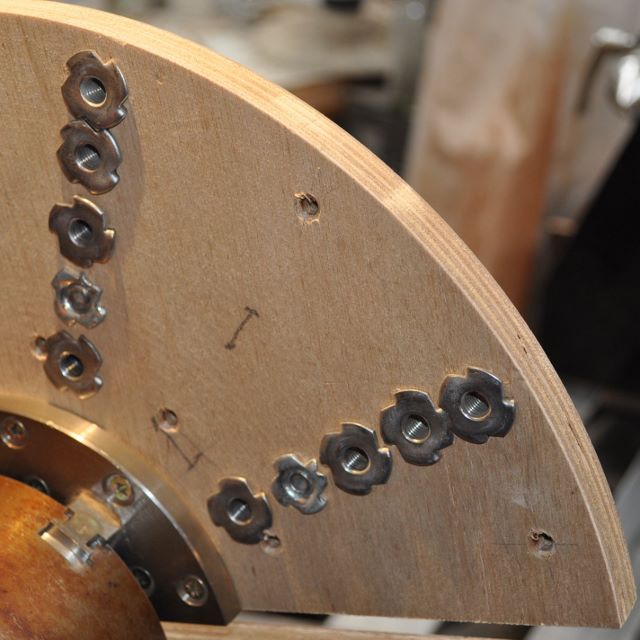 Bowl reversing jaws are useful to hold some kinds of bowls by their rims while you finish turning their foot. You can buy sets ready for use, but I made my own. I cut  four plywood squares and then removed a corner from each one with the band saw. I fixed them to steel carrier plates like these that match my chuck. I turned the quadrants true, marked positioning lines, and fixed movable pegs to the quadrants. The pegs form a circle that grips the rim of the bowl. I did the final turning of some of the bowls I sell here using this homemade kit.

The first pegs I tried were pre-drilled rubber bungs from a home-brewing supplier. They have a taper, which gives them a dovetail grip. I drilled holes in concentric circles on the quadrants and fitted 8 mm tee nuts (the kind with prongs to hammer or press into the wood). 8 mm bolts held the bungs firmly in place. There was a neat ring of 8 bungs on the bowl reversing jaws ready to grip almost any size of bowl.

I expected the soft rubber to have a non-marking grip and accommodate small positioning errors. But the rubber bungs turned out to be a bad idea because they had too much ‘give’. I found that any but the lightest cuts could move the bowl in the chuck. My next move was to turn a set of wooden pegs to replace the bungs. Another option would be to make solid wooden jaws, fixed to the quadrants and turned to give a more even grip on the bowl. These would have to be renewed from time to time.

This was an easy job. I cut short sections of a moderately soft timber (from an old curtain pole) and drilled an 8 mm hole right through the middle of each one. I mounted them in the lathe between a conical ‘dead’ centre in the headstock and a live centre in the tailstock. The dead centre had enough friction to drive the piece. Doing it this way ensured that the holes were central in the finished pegs.

I turned the pegs to the same size as the rubber bungs. They are 30 mm long, 30 mm wide at the top and 26 mm wide at the bottom. I could have used shorter pegs, but I had Allen bolts the right length for that size. I used a parting tool and calipers to set the greatest and least diameters. A sharp spindle roughing gouge cut the slight taper. I used a skew chisel to square the ends so they would sit firmly on the quadrants. After using them, I found that changing the position of the pegs is more convenient if they are a tight fit on the bolts, so I added a little glue to the thread. This allows the pegs to be tightened in place on the quadrant without using a key.

It’s important to position the tee nuts accurately so the pegs grip evenly.

I used them to remove a temporary chucking tenon from the base of a Robinia bowl. They held better than the rubber bungs. But hard wooden bowl reversing jaws of this type cannot be tightened too firmly or they will damage the bowl’s rim. They never give the most reliable grip and heavy cuts cannot be taken.  Also you need to decide a safe maximum speed on the lathe. Tailstock support will give more security. Even so, wooden pegs could mark or damage a fragile rim, so care is needed. I have heard of people using a rubber sleeve over a wooden core. Rubber tubing or even plastic hose pipe might work for this.

Since writing this post I have bought a commercially produced jaw set from Axminster Power Tools. It has aluminium carrier plates and white rubber pegs, smaller than the ones I made. I have to admit that they work better than my homemade version, with a more secure grip and no damage to the bowl.

If you make a set, aim for stiffness in the quadrants, secure fixing of the quadrants to the carrier plates, accuracy in the hole positions and use smaller pegs than I did. The white rubber works well. Run the lathed at a speed you are comfortable with.